You might remember Martin’s Burton Uninc (Burton A in the post). He liked that board so much after it was properly tuned that he… bought a Capita DOA. Here it is pictured with one of the Martinette’s baby Burton which was also brought in for a short back & sides:

As you can probably see Martin’s still completely blind to board top aesthetics. Still the DOA board has a good reputation although I find the naming (apparently “Defenders of Awesome” rather than the other more medical term) slightly tasteless.

My daughter has a Capita Birds of a Feather and when I tried to tidy it up before first use I was a bit stumped by both base & side edges. They didn’t seem to be any one angle and they are heavily striated by the factory grind. I called the Capita importer and was assured that base & side are both 1.5 degrees and anyway why on earth would I want to mess with edges on a board? You could argue that the real question is why set side angles at 1.5 degrees when no-one makes 1.5 degree side file guides?

So here are the base edges before: 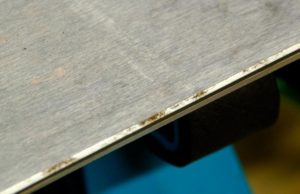 You can see that they are both rusty and striated. Fortunately bottom edge 1.5 degree guides are widely available so the rust was zoomed off quite quickly and the ridges taken down a little – not too much as it’s brand new and I try to conserve steel where I can.

Brand new board. Heavily ridged edges. 1.5 degrees. Not even 1.5 degrees! Look at this snap: 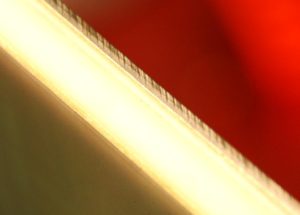 If you look closely you can see there is a line parallel to the base which marks the point where the angle breaks from less than 1.5 degrees to more than 1.5. What are they playing at? The temptation here is to work the edge to a single, whole number angle and just get rid of whatever the factory tried to put on. However, again, rather than file away the life of the board I decided to leave it as is and sort it out when Martin comes back from his first break. So a couple of coats of Zoom wax and it was good to go.

I’ve added this photo just because I appreciate a bit of marketing hyperbole: 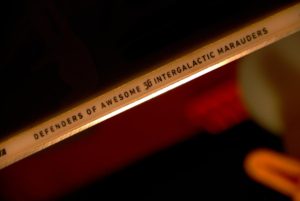 The baby Burton was much less hassle in that it (1) looks cool:

and (2) has nice straightforward 1 & 1 degree angles. As is so often the case kids don’t seem to mash their snowboard edges too much so once the board’s base was flattened slightly and the gouges redressed it was a simple job to get edges just right. Again, kids’ boards always seem to have completely dried out bases so after it had swallowed half a pint of Zoom renew it was ready for a top coat and a polish. Hopefully Martinus Minimus appreciates the effort and finds it glides that bit better.