Ali dropped off her Rossis and brought Mr. Ali along to hand over his Priors in person. I’ve read about Priors (hand made in Whistler) but these are the first ones I’ve had my gloves on.

First impressions: they share some DNA with DPS skis – nice uncluttered tops & bases, thin, light. Flat. The bases are hard and don’t melt as soon as they see the base doc iron. However, obviously, they could have used proper black P-Tex for the bases instead of wishy-washy blue.

Also, DPS make sure the owner doesn’t need to shave his sidewalls. And they tune the edge by hand before selling them. Prior hand over rather wiggly edges, which resisted all attempts to photograph. They’re sorted now though.

Ali’s Rossi’s were pretty nice but had some existing ham fisted base repairs from a P-Tex candle. Did my best but really it’s best to avoid putting that low boiling point mince into your bases if you can.

Julian dropped off a family of skis before his Easter ski trip. Here they are all shined up: 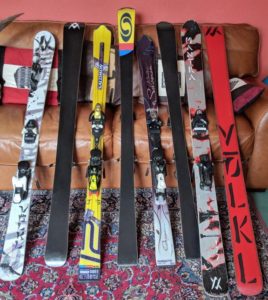 They look great and Julian can hold his head high in the baggage reclaim area as he drags them to the transfer bus with his wife & kids racing ahead, not offering any support whatsoever (maybe that’s just my family).

However closer inspection reveals that the daddy Völkls are actually on their last legs.

Take a quick look at the base when it arrived at the Cave: 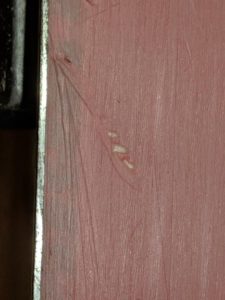 That wee nick only had to dig down about half a millimetre to reach the wooden core. It looks like the Völkl design team cut weight by using skinny P-Tex. The edges are also skinny. 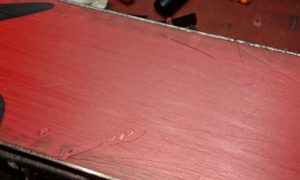 Oof! See the black tabs from the edges shining through the P-Tex? You can feel the lumps along the edge. Not much life left there.

Sadly the edges are already disappearing down the side so although we would normally prescribe a base grind to bring everything down then reset the edges there simply ain’t no base left to play with. Tricky.

So I carried on and finished the job but there’s only one more holiday left in these puppies I’m afraid. 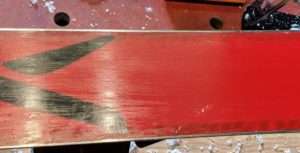 Finally, and I’m not pointing the finger here, Julian mentioned that he has an edging guide & file that he swipes over the edges from time to time. All I’m going to say is that you really, really need to spend an extra few quid on a sidewall planer. And you need to use it, at least once per edge. Just sayin’…

In between the snowy weather and my recurring trips away from Aberdeen it’s all been a bit hectic and taking photos tends to be the first thing that is cut when it’s getting frantic. So I was pleased to see that I did remember to take a couple of snaps of things that caught my eye. 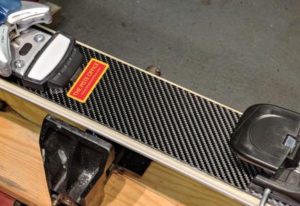 Brian bought these very expensive skis on a whim on holiday last season but felt they were a little bit flexy underfoot so he scoured the dark web for someone who could supply a couple of plates of woven carbon fibre. Our favourite tech guru Jon Coster at the Piste Office fitted them for Brian. To be honest it doesn’t really matter if they make any difference to the handling, the plates look gorgeous.

I can’t even remember what brand these skies were, but this comedy whisker of white P-tex cheered me up as I tried to sort out the rest of the base which had been sanded at some point in the past as part of an in-resort service. Sanding P-tex always results in fur on the base which is a pain in the neck to remove, so if you’re ever tempted to try it please don’t. The skis came up quite nicely in the end but I forgot to get the phone out for the “after” picture: 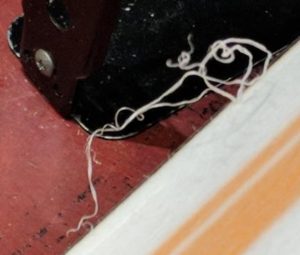 Lesley brought a load of equipment in for a service and all was going well until the edges on her Dynastars were subject to inspection. You can see on the left that the edges were waving in & out a bit. I sometimes wonder if there’s a ski servicing tool that is actually designed to leave this hopeless finish. Anyway it left the edge significantly hardened, and once through the hardening it became clear that the edge was less than one degree:

If the bottom of the edge (side nearer the base) doesn’t get touched by the file in a one degree edge guide then the edge must be less than one degree. You can see the dark strip next to the base bevel in this photo. Again, who knows what the last guy thought he was doing or if he applies any sort of quality assurance to the equipment before it goes out the door. Anyway, loads of elbow grease later the edge looked as its creator intended it to – straight, shiny and one degree all the way along:

Sadly another pair of the skis Lesley dropped off had suffered the same treatment. Not only is is a drag for me to break through the hardening – the first edge alone took 25 minutes to get back to a decent state – it means I have to take off more steel than I want to get back to the proper bevel. Anyway, they should be much better to use now.

Finally, these three boards were dropped off in varying states of wear. They all left in good shape, although Aidan’s Salomon has been “repaired” by someone with a black P-Tex drip candle in the past which has left it streaked with black as though it had been attacked with a sharpie. 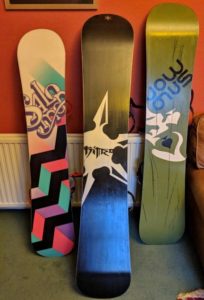 I’m really not a fan of drip candles as you can’t warm the base first, the P-tex is extra soft and the person applying the P-tex gets lungfuls of toxic smoke. When you need to repair over an old drip candle repair the candle P-tex will start to boil before the decent quality, stiffer, higher melt point stuff techs use is even melted, which makes getting a good repair a pain in the neck. Apart from that, all three boards had good flat bases and came up very nicely. Tor’s Nitro is a lovely piece of kit, except for the silver foil that they decided would look good on the base but doesn’t make repairing scratches any easier.

That’s it for now, more entries when I’m back from my travels on 26th March.