Scott showed some initiative in getting his ancient Salomon blades into the cave for a short back & sides before the tidal wave of gear starts later in the year (here’s hoping…).

Tops were in good nick, considering they must be 14 years old. Bases scored top marks for flatness, but they were a bit more used-looking, completely lacking wax and with a few wee scratches.

However the scratches were mostly superficial, and as the dead white bases needed a good seeing-to with the structure stone to try to bring them back to life I had another look after the treatment. Each base had five or six minor scratches that deserved attention: 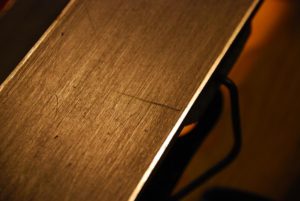 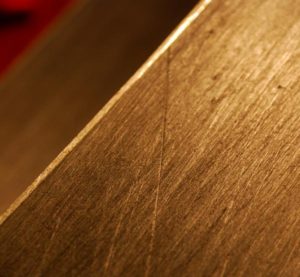 So these tiddlers were quickly filled and scraped flat, then structured again to blend them in. 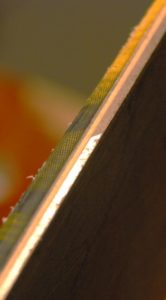 The edges had never been sharpened, as they still had the usual factory inflicted grinder 45 degree striations and the sidewalls were virgo intacto. However Salomon had managed to make an intriguing pattern on the side edges; presumably they ran the blades past the grinder once, turned them around, let them get halfway through the grinder again then changed their minds.

I had a hunt around the internet to see if the blades were given a different tune from the standard Salomon base 1/edge 2, and sure enough the tech manual suggested base 1.5 and edge 1 – unusual as most people normally maintain an edge angle of 90 degrees or less. Anyway 5 mins with the Sharpie revealed that these blades had left the factory with a 1/2 tune so that is what they got.

Regular readers (I use the plural here optimistically) will know that I tend to sharpen skis to the tips then leave it to the owner to detune the tips if they wish. For the blades I saw a couple of stern warnings of certain death if the tips aren’t detuned so I buckled under the pressure and brought them down a little.

Following some tidying up of the nicks on the tops, time for some Zoom pink base renew and green universal top wax: 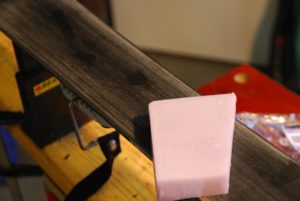 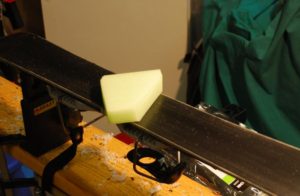 After a bit of elbow grease the bases came up nicely, ready for the next 14 years… 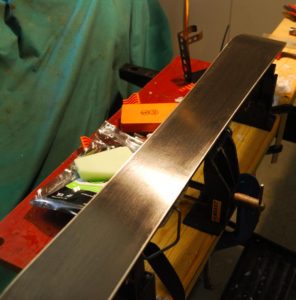