It’s that time of year where I’m too busy working to take photos, so if you see your gear in the pictures and would like to leave a comment please do. Just a note to Susan – the 90 minute turnaround on the Gnu was an artifact and not a promise for future performance 🙂 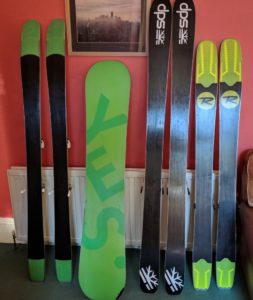 Eddie dropped off his Yes Basic for a repair recently, then spent about 30 milliseconds riding at Nevis range before yanking some more plastic:

So we’re down to the tabs on the edge here, usually better left inside the board.  Nothing too serious, but we’re working with coloured base P-tex rather than sensible old black, so whatever we do is going to look a bit rubbish – rather like someone getting a burn and needing a skin graft, looks OK unless you have a tattoo in the area of interest.

I’d finished the repair & waxed the board up before I realised that I actually have a lime green P-tex repair strip lurking in the bottom of the repairs bucket. However, based on recent statistics it will only be a few days before Eddie is back at the door with more eye-watering damage to the board – we’ll get it next time.

It was interesting to see how the previous repair is holding up – pretty well if I say so myself. A tiny strip of Araldite has dropped out, but that’s better replaced with more flexible P-tex anyway:

Tom dropped off a pair of used Völkl tourers and some new Rossi Soul 7s. Naturally that invites comparisons between the two. I’m a fan of Völkls – never seen a pair I wouldn’t be happy to own – but the Soul 7s are gorgeous and like most men I’m a sucker for a pretty face.

So let’s cut to the chase and start scoring.

Flatness – both sets spot on. 1 point each.

Base abuse – Völkls definitely have the edge here as Tom has battered them to death. 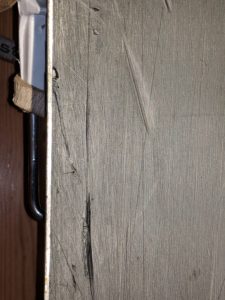 Nothing that can’t be fixed but some attention required, including that wee spot where we’re down to the steel.

So we’ll call that Völkls 1, Rossis 0

Edges. Tricky. Let’s start with the Rossis. Brand new, so like a lot of skis they have a shabby grinder job on the edges:

Now I understand that if you’re competing against “race to the bottom” Decathlon skis you need to cut a few corners, but Rossi have pretty much stopped European production for all but their very top skis so they’re paying someone in China or Vietnam  a dollar a day to chuck the skis through the grinder, so perhaps they could go crazy and teach that guy to change the wheels when they’re worn out? You can actually see not just the striations on the edge but the bumps right on the very edge. Run your thumb down the very edge and it goes “zizz”.  It can be fixed – here is the same edge after a bit of TLC: 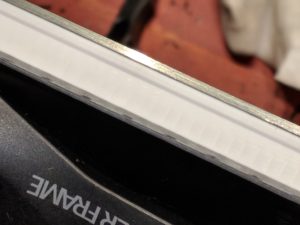 Sadly the Völkls were a bit rubbish as well, with lumpy grinder marks but also one edge on each ski sitting at about two degrees and the other sitting at about three degrees. Not only does this waste my time but I have to decide where to leave them for the client. In this case three degrees won, despite the Völkl standard being 2 degrees. Less steel was sacrificed getting to 3.

So the score for edges is -2 for both skis.

Weight: Völkls are bigger in all dimensions but weigh less so 2 points.

Waxing was a doddle for both with their lovely flat bases, and it’s hard to tell new from old once they’re finished:

So the winner is definitely Tom for having these great skis in his quiver. I’d take the Völkls if pushed.

Colin was my first customer and has probably been the most loyal with various sets of skis coming through the shop and plenty of recommendations to his mates.

One thing I really like about Colin is that fact that, despite spending the sort of money on skis and bindings that could buy you a flat in Torry, he’s not frightened to ski the nuts off his kit. Naturally that leads to a few minor dings:

But fear not, DPS know a thing or two about skis and use rufty-tutfy P-tex, probably 7200 or higher, if it exists. So while that means the repair P-tex takes a while to weld in, it also means it’s staying there for good. You just need to remember that there isn’t really anywhere for excess heat to go on these super lightweight carbon fibre skis so be vigilant.

DPS are the only people I know who hand-tune skis at the factory, which makes tuning them an absolute breeze. Like most manufacturers they’ve parted company with stainless edges, so even if the edges are worse for wear you can get them back in shape fairly easily without wearing out all your files. They even cut back the sidewall polythene above the steel edges so that your overworked local tech doesn’t need to do it himself.

It goes without saying that the bases are perfectly flat and, despite the very thin skis there’s no “pull through” of binding  screws. Unlike half the snowboards I see that have “wax wells” under the bindings…

So it’s the same old story – you can have as much fun on your Decathlon skis as Colin has on his DPSs – they’re only a bit heavier, and a bit softer, and a bit more flexi – but you won’t have the feeling of innate superiority as you pile out of the chopper into the unknown…

Spurred on by Ally’s recent shop full of skis, Neil thought he’d go one better and bring in five pairs for attention. And attention is what they sorely needed – have a look at this typical gouge:

Or this rusty edge (blending into the wooden plank for the vice so it looks a bit odd):

At the risk of sounding like I’m giving a lecture, please try to dry off your gear after a day out. You can see in the snap above the water staining from the binding sneaking down to the edge – this is where the water was hiding when Neil left the skis to stew in his roofbox. Even without getting the entire edge back to bright metal, see how much steel had to come off a single edge: 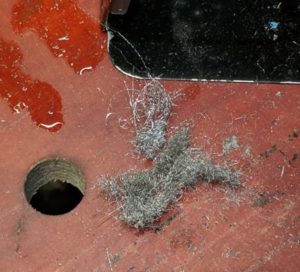 You’ve paid for all that metal and it won’t last forever, so please try to get busy with the tissues once you leave the slopes. I know all your mates with their rental gear just dump it and head to the bar but sometimes you have to suffer a little for the gear you love – just ask anyone who’s had a classic car.

One wee point to make if you find yourself surrounded by budding skiers and are tempted to buy everyone their own planks – you might want to consider getting skis with the same base & edge bevels. Neil’s planning to return for a lesson and he’ll be finding out then that the Dynastars are 1,1 the K2s 1,2 and the Atomics 1,3 so he’ll be buying three edge guides to keep on top of everything. Don’t bother buying a variable edging tool – they fill up with swarf from the bastard file and water from the diamond files and you can probably guess what happens after that. Get the edge guides the pros use – simple aluminium ones.

Here is the line up after the base wax has been scraped, patiently waiting with the rest of the backlog for their top coat then the finished article ready for collection: 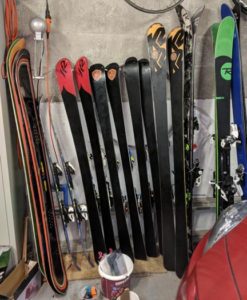 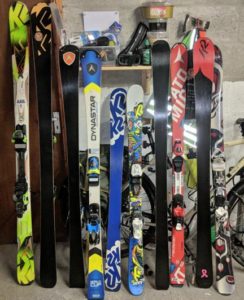