Chris was too embarrassed to drop off his battered board in person so I picked it up from his mum’s place. There was lots of surface damage: 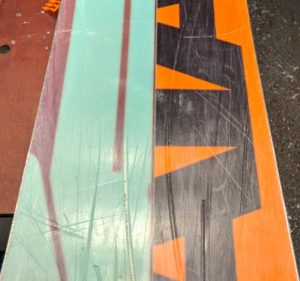 The gouge just left of centre has gone through the P-tex base, the underlying fibreglass and into the core of the board.

The other gouges are ugly but haven’t penetrated the fibreglass as this one shows: 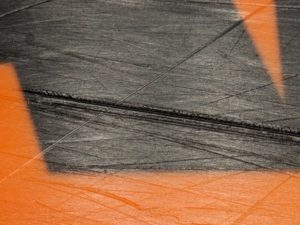 The gouges tend to have raised edges so they need to be flattened and some of them opened up a little to give the repair P-tex something to stick to.

“What about the edges?” I hear you cry. Well not very nice either:

Quite a lot of quite deep scars which are too deep to be ground out entirely.

So once the anaesthetist & theatre nurses had been assembled we were ready to go to work. First off the broken ends of the fibreglass have to be cut and the edges of the big gouge smoothed off – both jobs for a sharp penknife. Although in theory the glass reinforces the resin, and therefore this piece of the board sandwich, the loss of integrity of a few broken fibres is neither here nor there so we can sweep along. One the cut is cleaned up it’s good practice to melt some metalgrip into the wound first as it is basically P-tex with a bit of glue and it should adhere better to the underlying layer. Once the metalgrip has had 15 mins to cure it’s time to melt the P-tex in over it – and the two thousand other gouges. Once that’s done the board is probably as ugly as it gets, covered in black & clear plastics:

ergonomic tool but have to use a bit of broken ruby stone instead. Anyway the base is relatively soft and it’s not a long job. The structure blends the repairs in with the virgin base and gives the base wax something to bite on as well.

Regular readers will know that Bataleon leave their base edges with no bevel, assuming that the kicked up wings on the board do the job of keeping the base edges out of trouble. Which is great until you have to try to grind out some deep scars, and then you realise that there’s no such thing as a zero degree file guide. However, we can reach back into the distant past of Alpine tuning, don a beret, light up a Gauloise and before you can say “Bof!” you’ve wrapped a bit of tape around your mill file and made a 1950’s back street low angle file guide.

I’m not going to pretend that the base edges looked like new afterwards but they are at least out of the woods.

As you can imagine the base drank a gallon of the base renew wax. Once it was scraped the Zoom Universal on top polished up nicely and the board is ready for its next skirmish.