As well as lowering the tone of the Cave with his Scallywag (2nd right here) Eddie handed over a wee challenge in the shape of his Yes Basic. 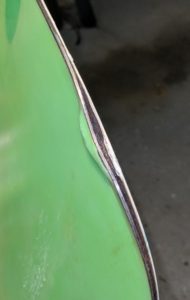 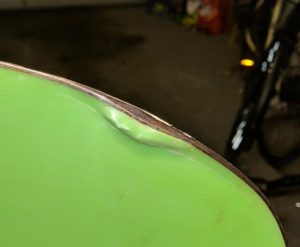 Move along folks, nothing to see here – apart from a serious delamination and an edge bent in two dimensions. Not very pretty inside the gaping hole either – hard to say exactly what’s going on.

Let’s peel back the P-tex to have a better look:

So it’s not pretty but it’s probably saveable with a bit of TLC and the healing powers of Araldite.

First we scrub the wound with a wire brush to clean it up, then careful application of torque through pliers to straighten up the bent edge. Then undercut the edges of the P-tex base so that the patch is held in place.

Normally on the flat of the base you use a neat template to cut a perfect semicircle out of the base P-tex then use the same template to cut the new patch. However, life is obviously never as simple as the advert so we need to be a bit more creative here as the damage is on the scoop so it’s in 2 dimensions. So let’s do a bit of brass rubbing: 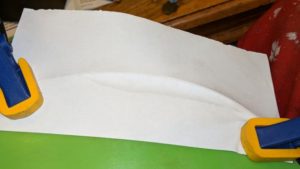 Once you have the shape on the paper you simply clamp the paper template to the P-tex sheet and use scissors to cut the patch to size. The patch here is held in place by itself, just rather satisfyingly clicked in place:

Once the patch is the right size, it’s a simple matter to mix up some Araldite, heat it up with a hairdryer and apply it to the base & patch. I would love to show some pictures of this process but if you’ve ever chased a pint of hyper-fluid glue around your living room, trying to avoid spilling it on the furniture and carpets, you’ll know that taking photos is the last thing on your mind. Here it is with the usual arrangement of plastic sheet to prevent sticking, thin wooden sheets to spread the force and a few clamps done up nice & tight: 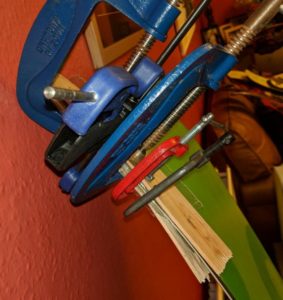 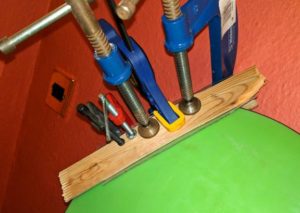 Just leave it like this, perched over your hottest radiator, for 48 hours and hey presto – relaminated. Here it is restructured and with the base renew wax on but not yet scraped – 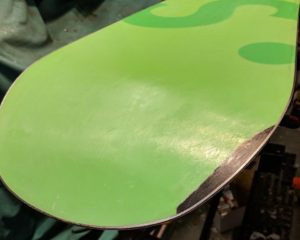 – and here is the board with top wax scraped & brushed, ready to go. All in all a nice wee repair and could only have been improved with some lime-green P-tex instead of boring old black. 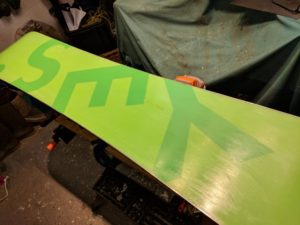 One thought on “Eddie’s wee bump”