John has waxed & edged his own stable of skis already but wanted to make sure he was doing it right. As ever we’re happy to oblige. Remember, getting a lesson doesn’t cost any more than having me do the work.

He came round with a set of Line Sir Francis Bacons which looked OK at first glance but proper inspection with the hand lens revealed a break in one edge – more on that in a future blog post. Once the tears had dried we got to work on his Whitedot Carbonlite touring skis.

As always, following a brief inspection the bases were checked for flatness with the true bar. Well they were sort of true with a bit of an M shape going on longitudinally and a definite bulge under the heel binding on one ski. Nothing too radical but worth watching in future. It’s the sort of thing you can’t see without a true bar & backlight so if you’re the sort of person who skips medical check ups in case the doc finds something then maybe the true bar isn’t for you. 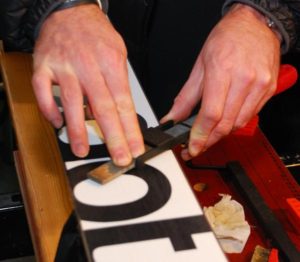 Next step as always is to double check the base bevels with a sharpie and file in the appropriate base file guide. They were already at 1 degree as per manufacturer’s guidance so they were just given a few swipes to clear rust and a couple of minor scratches. 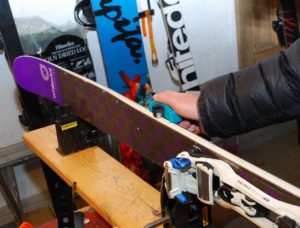 Before we could do any edging the sidewalls needed planing. Although the skis had been tuned once before there was a good bit of plastic in the way of the edging tools. As always getting the right combination of weight & speed to plane the sidewall perfectly smooth takes plenty of time & patience, especially as these walls had been left pretty lumpy by the last guy. If in doubt many fast & light strokes always beat one huge heroic effort. And finally, don’t be frightened to use a knife to remove big lumps if the alternative is shattering your planer blade.

Although pretty new the skis had been tuned once, in France. Whitedot changed from a 1:1 base:side bevel to 1:3 in 2014 so in theory the skis were new enough to have the more radical sides. Out with the sharpie once more, and we found that three of the edges were pretty much one degree with one edge significantly less than one degree. This is unusual and is probably due to the last guy not planing the sidewall radically enough and the file riding on plastic sidewall not steel edge. If he took skis with a 3 degree edge bevel and took them down to 1 degree (because that’s what the previous year’s models were and not everyone checks bevels before they start tuning) then he will have taken plenty of steel off the edge and his files may well have been riding on plastic even after a cursory bit of sidewall planing.

Anyway we’re here to edge & wax skis not cast aspersions about other techs, so on with the edging. John opted to keep the 1 degree side bevel as he’s been happy so far so it was just a case of getting the right combination of speed, weight, file noise and flair: 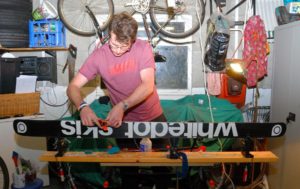 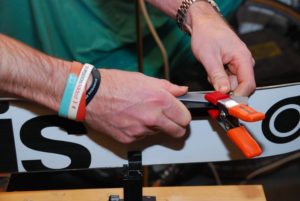 Like a lot of activities when you get it right it feels right so I think John achieved his ambition of getting more confident on the edging side of things. As always chrome file then 300 grit diamond then 600 grit diamond then gummi the edge back to just sharp not silly sharp. 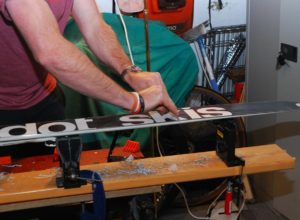 John tried out a few angles with the wax scraper, including this one pictured left. As always touring skis are a drag to scrape just because they are so big. 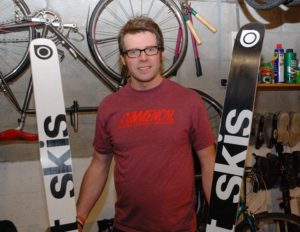 The scraping showed up the weird M-shaped bases again but some furious brushing left them in tip top condition. Here’s John showing off his planks and just ready to head back home and dig out a few more sets of skis for the treatment.